Home / Servizi / Sant’anna continues to grow with the tea 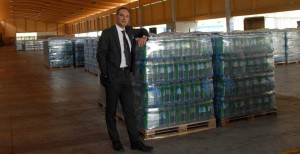 The brand of mineral water nation Sant’Anna – www.santanna.it – bottled and marketed by sources Vinadio continues to grow and does it in a serious way. The IRI data updated to August show for the market growth of 3.1% in value and 3.4% in volume. At the same time, St. Anne grew to 11.6 points in value and by 9.8 points in volume, three times more than the market average, that the position of the market leader with a share of 11 , 9 points (in value). “It is a healthy growth because not conditioned by policies promotions repeated, but supported by a strong relationship of trust with the consumer brand,” said Alberto Bertone, president and CEO of the company. “Most of the brands competitors grow at lower speeds, or decrease, or fail to grow in volume only operates major price cuts.” On the heels of this success, the company has launched the cold Santhe Sant’Anna. In only 4 months on the market, since its launch last May, Santhe Sant’Anna has achieved a weighted distribution of the total Italy 54 points. If we consider only one channel instead Hyper, the weighted rises to 89 points. The rotations of the product are above average and in the channel Iper the new reference is already beating some of the main competitors, historical actors of the market in the cold. These data added to those of the brand Sant’Anna lead in the first eight months of the year, the total number of bottles sold by the Company of Vinadio (Cuneo) to exceed 100 million units with a consequent increase in value of 25 million euros. The growth plan 2013 and the development of new products also includes further development of exports. The company has dedicated to international markets an internal structure that is growing to consolidate the markets are already open – such as Germany, Switzerland and China – and to conquer new markets in which to develop a commercial network.

Sources Vinadio Spa, which bottles and sells mineral water Sant’Anna di Vinadio, was founded in 1996 by Alberto Bertone, president and ceo. At the base of the operation is the organoleptic quality of water Vinadio, in the heart of the Maritime Alps, known since the sixteenth century. The company has about 200 million in sales with 750 million bottles sold in 2011. 60 000 square meters of factory, recently refurbished respecting the principles of ecological design and green building. 400 km of pipes in stainless steel. 310 000 bottles per hour. Automated warehouse management with 28 laser-guided vehicles. Logistics rail throughout Italy. These are the numbers the Piedmont, which has the merit of having introduced a revolution in mass market: Sant’Anna Bio Bottle is the first bottle of mineral water in the world truly environmentally friendly because it biodegrades in less than 80 days without leaving any trace in the environment. It is produced by a particular biopolymer derived from the fermentation of plant sugars, without using a single drop of oil.