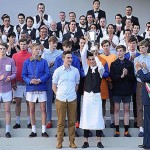 The decision of the British Fashion Council to place the next winter edition of  men’s fashion shows in London (7-9 January 2013) overlapping for two days to the dates already announced at Pitti Uomo. 83, from 8 to 11 January 2013 did go on a rampage Pitti Immagine. While the organizers of fashion shows are all committed to set up an international calendar that makes it more efficient and less costly manner possible and consistent work of buyers and journalists, this decision of the BFC shows a distorted view of the competitive environment among the major international events of fashion male, where Pitti Uomo long plays, successfully, the dual function of opening the season of sales and innovative platform for events and special projects of the great fashion design and contemporary culture.“It seems that the board of BFC do not worry about anything,” says Gaetano Marzotto, president of Pitti Immagine. “We are surprised by this initiative because we had discussed last June with the direction of the BFC and it seemed that there were conditions for a different outcome, which would reduce the potential risk of disservice to the exhibitors (among which there are many great British brands), buyers and journalists usually present at Pitti Uomo “. Even more puzzled Raffaello Napoleone, CEO of Pitti Immagine, which speaks directly to full-fledged attack by the British. “It is no coincidence that the news is out now that London is more than ever under the spotlight around the world through the Olympics,” says Napoleon. “The British are doing seriously: public institutions offer financial support, political, logistical and promotional scheme of the British fashion with a strong coordination of all parties involved. Even the royal family undertakes. And in those days the best areas of London will be available to the runways and fashion shows man in very favorable conditions. Italy, Florence and Pitti Immagine have all the numbers to fight and win this challenge, provided however, that much better and faster our ability to make a system, that around the fashion and its major events to grow a social climate of consensus and awareness of its importance. “